There is something about a long train ride through a strange country which can teach you more about yourself than you would have thought.   I had my headphones in, probably listening to some kind of french pop which I had become obsessed with while living abroad in Paris for the last 6 months.  It was 2013 and it was my last day in Europe and I rode through the sun drenched Italian countryside traveling from Tuscany to Lazio, looking out the window at the passing farmers plowing their fields.  As if time had stopped and I had been transported into a more simple time.  The earth smelled as if rain had been starved from the land, and the sun beat down hard like a hammer straight into the soil.  It was on that train I was ready to reflect upon my last 6 months of life.  My arms spread wide, and heart full of life as I rode towards Rome with a sadness to leave and an eagerness to return. 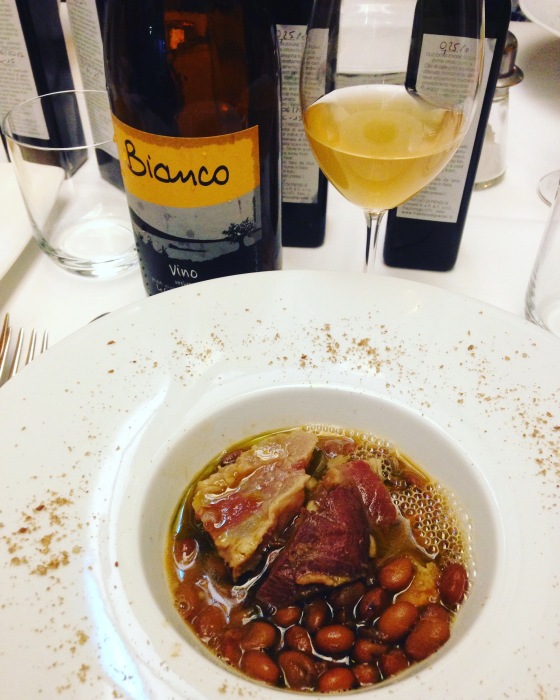 Every time I drink the wines of Le Coste I get taken back to this rustic Italian countryside train I sat on that summer.  The wines speak of freedom, the vines grown with the philosophy of beyond organic.  The wines made themselves, and taste as if they have life within them and are telling you their story while you consume.   Le Coste has been making wines on the corner of Lazio and Tuscany since 2004, and are not only vignerons, but tend to herds of livestock and keep a garden full of fruit trees and olive branches. The wines shine of that rustic Italian sun, I imagine being on a picnic table telling tales of that adventure we took years ago with my friends drinking their liter red “Litrozzo.”  This wine you could call serious, but by the way it is made it is meant for nothing other than to share, to laugh, to fall in love with someone or something.  This is wine which speaks of freedom from a conventional way of life.  The wines are all made of local varietals, the whites and reds enjoy long macerations, and the rosato makes me think of drinking pink lemonade when i was just a boy.  They seem to glow in the sun
We are privileged to pour the wines of Le Coste. Come taste them all or take a glass, either way it will be a good time.
Cheers,